Michelle will be taking a short break, I will be back June 7th with a Sunday Post! Stay Safe! 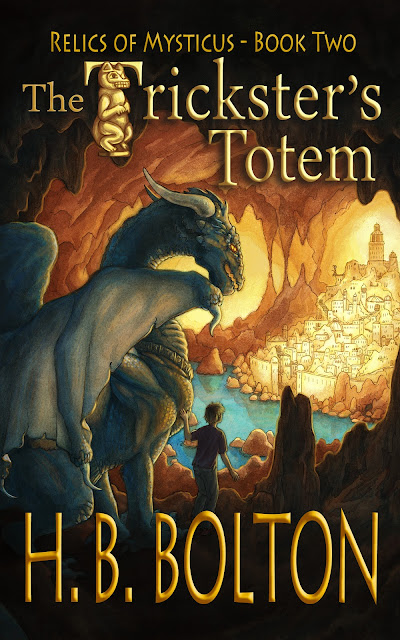 Life has returned to normal for fourteen-year-old Evan and his older sister, Claire. That is until Dunkle, a clever but stinky little imp, pays an unexpected visit to their school. He has come to take the siblings back to Sagaas, the mythical realm of the gods. Once again, a Relic from the ancient Mysticus Orb has fallen into the wrong hands. Only Evan and Claire, with their unique mystical abilities, can help find it.

Through the power of the Trickster’s Totem, a coyote trickster has escaped. His laughter echoes throughout the realm, as he spreads mischief and mayhem. He burns an entire crop of popcorn, carves his grinning image into sacred artifacts, and things really get interesting when he shape-shifts into Evan’s friends.

Claire and Evan must capture the Trickster, retrieve the Totem, and be careful not to become sidetracked by robotic Steampunk animals, “sweet” pixie-like Pains, and a problematic mermaid … all while dodging Mothman-like aces. Most surprising, Evan discovers the true reason dragons exist in the Native American Spirit World.

Excerpt
“Here we go again,” Evan said and watched Vince, the resident bully, swagger toward yet another freshman. A sly grin spread across Vince’s face, and with practiced precision, he upended the boy’s lunch tray. Meatloaf landed on top of the boy’s head, mashed potatoes flung into his hair, and milk splashed down the front of his shirt.
“Oh, so sorry. Let me help you with that,” Vince said, using his fingertip to swipe a dollop of potato from the boy’s nose and flick it on his face.
The poor kid stood there, frozen. Evan wasn’t certain whether the little guy would scream or cry … but he did neither. Instead, he slouched, hung his head and slunk away. Evan knew just how he felt.
Vince stalked through the white cafeteria and eventually halted beside another group of students. He lifted their table and slammed it back down. A few of his buddies joined him, and with nothing but a simple glare, the students obediently stood and scurried away. All that remained on the table were their untouched lunches, left for Vince and his cronies to enjoy. The scene reminded Evan of a flock of vultures feasting on spoiled fish. Every single day, Vince and his parasites chose a different table to torment.
It had to stop.
Evan bit his lower lip, and out of nowhere, a fried potato nugget skimmed past two tables, nailing its intended target—big guy, wearing drooping jeans and leather jacket. Yes, direct hit! Vince lifted his stubby hand and rubbed the back of his neck. Evan chuckled. But the entertainment didn’t end there. All of a sudden, a bunch of cooked veggies flew through the air and pelted the bully’s head. Vince brushed his fingers through his shaggy hair and peas landed on the table. He jumped out of his seat and scanned the perimeter of his lunch table.
“All right, who did it?” Vince bellowed.
The guy sitting to his right asked, “Did what?”
“Who keeps hitting me with peas?”
Vince’s buddy shrugged and continued to eat his lunch. But that didn’t seem to satisfy Vince. Any second now, steam would most likely blow out of his nose, and the bulging vessel on his forehead would burst. Vince ranted for a while and shook a few kids. Finally, the red on his face lightened to pink. He was about to sit when a plastic bowl slid along the bench, and Vince’s large bottom landed right into chocolate pudding. He howled loud enough for all to hear. Evan tried to look as surprised as the rest of the cafeteria, but in all honesty, it was difficult to refrain from smirking.
~~~~~~~~~~~~~~~~~~~~~~~~~~~~~~~~~~~~~~~~~~~~~~
Mini Post

If you haven’t read the first book, The Serpent’s Ring, then I need to let you in on a little secret. Evan is able to move objects with his mind. He isn’t supposed to use his power in front of other people, but in this case, he just can’t help himself. How can he be expected to just sit back and watch Vince intimidate other students? Especially when he knows he can do something to stop the obnoxious bully. It has been a while since Evan used telekinesis, and he had almost forgotten the way his heart skipped a beat the first time he used his power to levitate an old Model T car and fly it to Lake Huron. Flinging tater tots across the cafeteria isn’t quite as thrilling, but it will have to do until he is called on another quest and
leaves the mortal world behind. 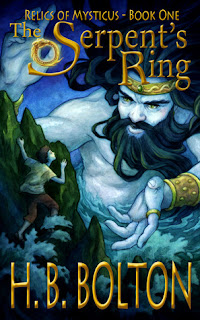 Description of the first book in the Relics of Mysticus series, The Serpent’s Ring:
Evan and Claire Jones are typical teenagers, forced to go with their parents to yet another boring museum … that is, until something extraordinary happens to make their day a little more than interesting. After following a strange little creature into a closed exhibit, Evan and his older sister, Claire, discover the Serpent’s Ring, one of the magical relics formed from the shattered Mysticus Orb. Purely by accident, they have awakened its powers and opened a portal to Sagaas, land of ancient gods.

Before the siblings can comprehend what has happened, the Serpent’s Ring is wrenched from Evan’s hand by an enormous fish and flown back to Aegir, the Norse god of the sea. Evan and Claire, accompanied by a band of unlikely heroes, must retrieve the Serpent’s Ring before Aegir uses its immense powers to flood all the lands on Earth.
The Serpent’s Ring is FREE for Kindle May 28th-June 1st.
Book Links:
Amazon|GoodReads |Barnes & Noble

Author Bio:
A magical part of H.B. Bolton’s childhood was being swept into worlds of enchanting characters, fantastical creatures and extraordinary powers—simply by picking up a book. As a mother and a teacher, she was compelled to create imaginary worlds of her own in order to share them, not just with her children, but with all children. H.B. Bolton lives in Florida with her supportive husband and two highly spirited children. Shh, can you keep a secret? Not only does she write books for the young-at-heart, adventurous sort who yearn to dive into a good young-adult fantasy story, she also writes spellbinding, heart pounding women’s fiction. These particular books are written under the name Barbara Brooke, but that’s another story, altogether.
Books by H.B. Bolton:
The Serpent’s Ring (Relics of Mysticus, Book One)Breaking Down (a short story)
Hungry (a short story)Coming May 1, 2013
The Trickster’s Totem (Relics of Mysticus, Book Two)
Author links:
Website| Facebook | Twitter  | Goodreads | Pinterest | Amazon Author’s Link

Lots to do ~ Task It Tuesday!

I smell change and it smells amazing ~ W