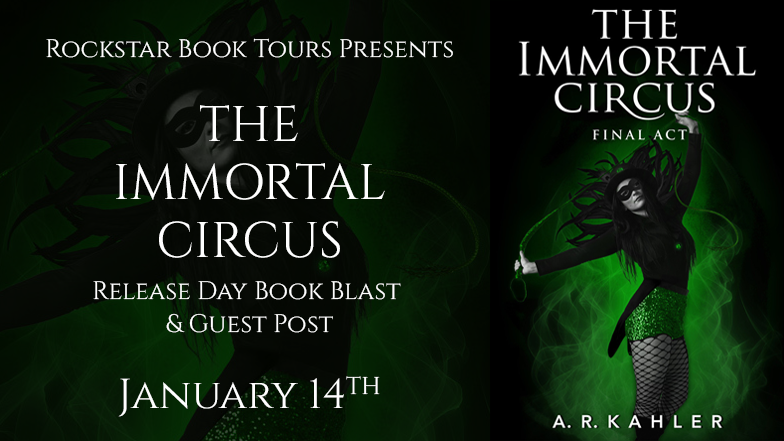 Today is the release day for THE IMMORTAL CIRCUS: FINAL ACT and I’m thrilled to be able to help out and spread the word about its release with an awesome guest post from Mab, an excerpt and a giveaway.

As with the first two books in the series, this third and final book will be released first in serial format. But this time a new episode will be releasing each week for six weeks until the novel is complete.

For those who haven’t yet stepped foot into the Cirque des Immortels, now is the perfect time to get started. In just six weeks the series will be complete and all three books will be available in their entirety to devour.

So be sure to check out all the details below for more information about this awesome series. If you’d like to know just a little bit more, there is a one week only tour going on right now, which includes its very own giveaway. So just head over to Rockstar Book Tours for the schedule so you can follow along.

And if you’d like the chance to win another prize pack, don’t forget to enter the giveaway in the Rafflecopter at the bottom of this post.

Now, let me turn things over to Mab, Ringmaster extraordinare.

The Final Act is here at last, ready to draw you in to that last bow over six deliciously tempting installments. Each week will take you deeper into the dark, debaucherous world of the Cirque des Immortels, right up until the thrilling conclusion. You thought you knew the Immortal Circus, but I can assure you, there’s still much more to discover. Great lies and greater love, old flames and new foes…but I don’t want to spoil it, not just yet.

So I’ll leave you with this. Just a taste. Just in case you weren’t ready to take the plunge.

The Big Top awaits…step right up.

I hate how desensitized I’ve become to dead bodies.

It’s not exactly a part of the gig, not really what I thought being the ringmaster for a circus would entail. But hell, Mab never left me a rule book when she handed me the job. I’m lucky she let me keep my head.

Melody stands beside me. It’s 6:00 a.m., and she’s in a loose cardigan and penguin-print pajama pants.

Despite the sleep in her eyes, there’s an alertness to her I’m trying my best to imitate. She stares at the body lying prone in the parking lot like it’s a science experiment gone awry, one that might blow up or sprout wings. I stifle a yawn with the back of my hand.

“Another evacuee?” I ask.

Not that there’s any need to ask: the answer’s an obvious yes. The bald guy sprawled on the ground can’t be older than thirty: no bruises or blood, no obvious reason to croak. He looks like he just dropped dead. Which, seeing as he went against his contract by trying to leave, is precisely what happened.

About The Immortal Circus: Final Act 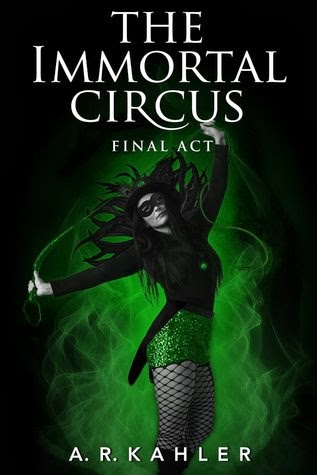 This book is a Kindle Serial. Kindle Serials are stories published in episodes, with future episodes delivered at no additional cost. This serial currently contains one episode out of an estimated six total episodes, and new episodes will be delivered every week.

Episode List
An additional episode will be delivered every week until the book is complete. New episodes will be added to the same book on your Kindle, keeping your place and retaining your notes and highlights. You’ll be notified via email when a new episode has been delivered.

Episode 1: January 14, 2014. All is not well within the Cirque des Immortels: war is brewing, the troupe is angry, and without Kingston there, Vivienne’s in over her head. But when an unexpected guest arrives, she realizes her problems have only just begun.

Episode 2: January 21, 2014. Now Vivienne must not only deal with a mutinous troupe, but her long-lost lover. To make matters worse, there’s a new player in the game. And this opponent is hell-bent on revenge. 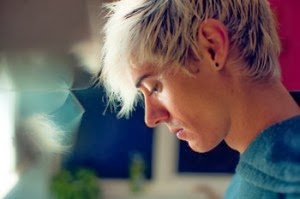 Alex is many things, but first and foremost, he’s a Sagittarius.

Born in Iowa and educated across the States, he’s taught circus in Amsterdam and Madrid, gotten madly lost in the Scottish wilderness, received his Masters in Creative Writing from Glasgow University, and drummed with Norse shamans. Sometimes he also walks about on stilts. Or sews. Or hammers tiny pieces of metal into pretty shapes.

When he’s not writing or climbing in the rafters, he’s probably drinking coffee. And seeing as he currently resides in Seattle, there’s coffee aplenty.

He is represented by Laurie McLean of Foreword Literary.

Other Books in the Series 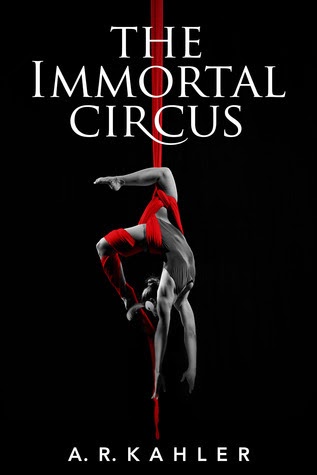 Murdered contortionists aren’t exactly what Vivienne signed up for when she ran away to join the circus. But like most things under the big top, nothing is what it seems. With a past she can’t quite remember, Vivienne finds that running away forever might not be as appealing as it once sounded—especially not when she realizes the devilishly attractive ringleader, Mab, is the Faerie Queen of legend—and that she and the rest of the troupe are locked in an age-old rivalry between the otherworldly Courts.

Aided by her friends Kingston—a feisty stage magician whose magic is quickly stealing her heart—and his smart-ass assistant, Melody, Vivienne finds herself racing against the clock to discover the culprit behind a series of deaths that should be impossible. However, the answer she seeks might reveal more about her own bloody past—and future—than she bargained for. 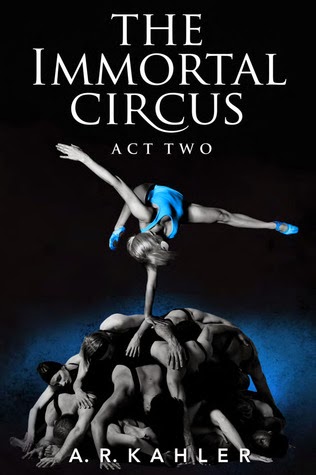 Vivienne is almost content with her new life in the Cirque des Immortels. She has moved up from selling cotton candy to telling fortunes, she has a gorgeous, magical boyfriend, Kingston…and no one has been murdered since the clash between the otherworldly Courts. Her life under the faerie big top would be perfect, in fact, if not for the nightmares and visions that compel her to seek and confront her half-remembered past. But for Viv, not knowing her past may well be a blessing. There’s a reason she ran away. But can she truly escape herself?.

The blast includes a giveaway for an awesome prize pack which includes a personalized copy of Act Two, a full set of trading cards and a signed bookplate.

Enter in the Rafflecopter below…

One response to “The Immortal Circus Release Day Book Blast”