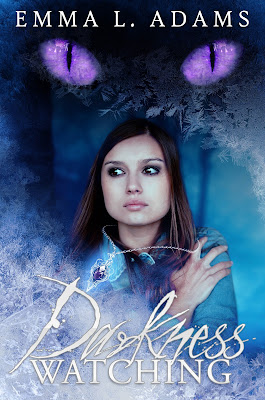 Title: Darkness Watching
Author: Emma L. Adams
Series: Darkworld #1
Publication: October 10th, 2013 by Curiosity Quills Press
Category: Upper Young Adult/New Adult
Genre: Paranormal | Urban Fantasy
Synopsis:
Eighteen-year-old Ashlyn is one interview away from her future when she first sees the demons. She thinks she’s losing her mind, but the truth is far more frightening: she can see into the Darkworld, the home of spirits—and the darkness is staring back.
Desperate to escape the demons, Ash accepts a place at a university in the small town of Blackstone, in the middle of nowhere—little knowing that it isn’t coincidence that led her there but the pull of the Venantium, the sorcerers who maintain the barrier keeping demons from crossing from the Darkworld into our own world.
All-night parties, new friendships and a life without rules or limits are all part of the package of student life—but demons never give up, and their focus on Ash has attracted the attention of every sorcerer in the area. Ash is soon caught between her new life and a group of other students with a connection to the Darkworld, who could offer the answers she’s looking for. The demons want something from her, and someone is determined to kill her before she can find out what it is.
In a world where darkness lurks beneath the surface, not everyone is what they appear to be …
GOODREADS
Buy Links

Excerpt
At that moment, the lights in the hall went out, as did the projector, plunging us into dusty darkness. Cara let out a shriek.
“It’s happening!” she wailed, clutching at her garlic clove which, not being securely fastened to her jacket, fell to the floor. With another shriek, she dived underneath her seat to retrieve it.
“Calm down! It’s just a power cut.” I furrowed my brow, trying to read my notes. Everyone talked amongst themselves as Mr Darton struggled to turn the projector back on. I couldn’t see any lights outside in the corridor, either. A whole school power-cut. Great. And why did I feel so cold?
A stream of faint winter sunlight shone through gaps in the blinds that covered the windows, lighting the myriad dust motes in the air. I sighed and tilted my head back, rubbing my eyes to stop them from closing. I could feel a headache building behind my temples.
Then a pair of eyes appeared amongst the rafters, and stared right into mine.
They gleamed violet, with vertically slit pupils like a cat’s. They blinked, looking down at the confusion below. Then they locked onto me.
Once, when I’d cut my finger on a kitchen knife, I’d gone into shock and nearly passed out. My vision turned blue around the edges, and everything acquired an odd, blurred quality. Right now, looking into those sinister, alien eyes, I felt exactly the same.
I’m going mad. It’s not real. Cara’s superstitions have made me start seeing things.
That, or the lack of sleep. I realised I’d stopped breathing. I could feel sweat on my forehead, but at the same time I felt cold all over, cold as the frigid December air outside. As if fresh snow covered me, slowly seeping into my skin through my hoody and jeans. But at the same time, it felt more like the kind of paralysing chill I associated with that moment in horror stories when someone saw a ghost.
Was it a ghost? I’d always thought ghosts would look…human. If I believed in them, which up until now, I thought I didn’t.
All around me, I could hear the other students chatting, laughing. No one screamed, cried, or ran for the doors. It was as though my own private bubble of horror enclosed me like the cage I’d envisioned earlier. Trapped.
Then I heard a faint whisper, almost like a breath.
“Ash.”
I would have screamed if I’d been capable of making a sound. I knew beyond doubt that those eyes, that voice, belonged to something which wasn’t human.
The eyes blinked again, becoming part of the shadow once more, as the hall lights came back on. For a moment, a swathe of blackness remained in the rafters, like a single patch of mist left behind after a fog has lifted. Not a single speck of dust disturbed the area around it.
Then it vanished.
I still couldn’t breathe. Those cold eyes remained imprinted on the insides of my eyelids, light purple, glowing and staring.
Staring at me.
I blacked out for a minute. When I came to, I heard Mr Darton’s low mutter into the microphone-not that anyone listened. Whispers filled the air, ordinary conversations. People talked about their plans for the weekend, not about monsters with violet eyes or piercing, unnatural coldness. The more studious skimmed through revision notes. I looked down and saw mine scattered all over the floor. I didn’t remember dropping them. I didn’t remember anything but those awful eyes.
I’ve cracked. Did staring violet eyes fall under the category of stress-induced hallucinations?
Cara tried to laugh off her moment of panic.
“I didn’t really think it was the end of the world,” she insisted.
The end of the world. Maybe that was what I’d seen. A sign.
Ridiculous. 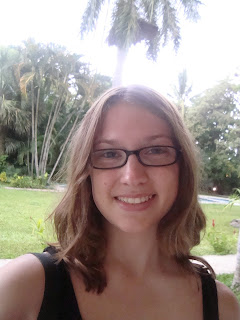 Author bio:
Emma L. Adams spent her childhood creating imaginary worlds to compensate for a disappointingly average reality, so it was probably inevitable that she ended up writing fantasy and paranormal for young adults. She was born in Birmingham, UK, which she fled at the first opportunity to study English Literature at Lancaster University. In her three years at Lancaster, she hiked up mountains, skydived in Australia, and endured a traumatic episode involving a swarm of bees in the Costa Rican jungle. She also wrote various novels and short stories. These included her first publication, a rather bleak dystopian piece, and a disturbing story about a homicidal duck (which she hopes will never see the light of day).
Now a reluctant graduate, she can usually be found in front of her writing desk, creating weird and wonderful alternative worlds. Her debut novel The Puppet Spell, published in 2013 by Rowanvale Books, is a fantasy tale for young adults and the young at heart, inspired by her lifelong love of the fantastical, mythology, and video games. Emma also writes supernatural fantasy novels for older teens and adults. Her next book, Darkness Watching, is the first in the upper-YA/New Adult Darkworld series, and will be published in September 2013 by Curiosity Quills Press.
Website: http://emmaladams.weebly.com/
Blog: http://throughthegateway.blogspot.co.uk/
Facebook: https://www.facebook.com/ELAdams12
Twitter: https://twitter.com/ELAdams12
Google+: https://plus.google.com/u/1/106335591763620970296/posts
Tumblr: http://www.tumblr.com/blog/emmaladams
Goodreads: http://www.goodreads.com/author/show/6563991.Emma_L_Adams

The Witches of BlackBrook Blitz

One response to “Darkness Watching by Emma L. Adams Blitz”