By now you must be tired of me talking about these books. I don’t blame you I have talked about them a lot. Since he will be coming out with one more you now have about another year to hear me talk about them. OH NO!!!! 😉

But that’s not all…They might make an animated MOVIE!!!!! I can barely breath….

Before I get ahead of myself lets talk about this book. I have been waiting a year for (as you know) and I was not disappointed.
Oh how I missed my Prince Charmings 🙂
The Hero’s Guide to Storming the Castle
(The League of Princes #2)
by Christopher Healy 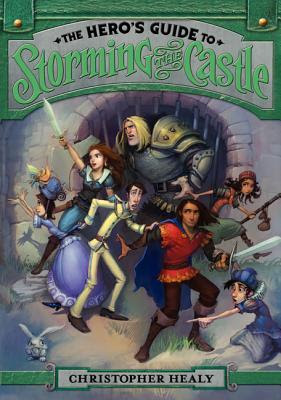 Book was Purchased on Barnes & Nobles by Myself
The review is my opinion of the book NO compensation
was give for reviewing this book
Hardcover, 496 pages
Published April 30th 2013 by Walden Pond Press
ISBN 0062118455 (ISBN13: 9780062118455)
edition language English
series The League of Princes #2

Prince Liam. Prince Frederic. Prince Duncan. Prince Gustav. You remember them, don’t you? They’re the Princes Charming who finally got some credit after they stepped out of the shadows of their princesses – Cinderella, Rapunzel, Snow White, and Briar Rose – to defeat an evil witch bent on destroying all their kingdoms.

But alas, such fame and recognition only last so long. And when the princes discover that an object of great power might fall into any number of wrong hands, they are going to have to once again band together to stop it from happening – even if no one will ever know it was they who did it.

Christopher Healy, author of the acclaimed The Hero’s Guide to Saving Your Kingdom, takes us back to the hilariously fractured fairy-tale world he created for another tale of medieval mischief. Magical gemstones, bladejaw eels, a mysterious Gray Phantom, and two maniacal warlords bent on world domination – it’s all in a day’s work for the League of Princes.

This book was just as amazing if not more so than the first one. It was like chatting with friends you haven’t seen in a while catching up on stuff they have been doing since we last talked. Last we left the 4 Prince Charmings they were planning on writing a book about Saving a kingdom because trying to be famous came and went faster then they could blink their eyes.

Having pulled one over on the Princes The Bandit King (Deeb Raubers) became very popular by the Bards. Much to the dislike of the Princes many songs were made about them too. I’m sure no one was happy with the song Elle and the four princes. (maybe Elle).

This time around the princes are asked to find the Sword that belonged to Liam’s Family by Briar Rose (the unfriendly sleeping beauty…or is she?) only problem is the sword was stolen by the Bandit King and his new home is the witches old castle (new and improved) which is pretty much inaccessible.

If only the circus was in town maybe they could come up with a plan to get in the castle and steal the sword without being notice. But what if the circus was the same one that scared the crap out of Frederick with the toothless lion. What a mess that would be. It would be worse if there was a Troll/Giant Fight, a Huge Snake, the Gray Phantom and an Epic battle that causes great chaos and almost kills someone. That would be terrible and make an awesome story.

The characters are still amazing, written so well. I couldn’t pick just one prince in the last book but I realized after reading this one Duncan IS HILARIOUS and Totally my favorite….Snort Laugh Hilarious. His entire family is a bunch of crazy people and I LOVED THEM. I want to be part of his family. You meet a few new characters and you learn a lot more about our “Heros.” Plus I think some of romance from the original stories aren’t what they seems. I seriously try not to give to much away and this book has so much going on its hard to say to much without ruining and I don’t want to ruin it for you.

This book was amazing. Added it to my favorites, just a fresh re-telling of a few classic stories and I loved that the story is so original. You never know what to expect. You really come to care about the princes and I have a whole new respect for the “Prince” in fairytales they really don’t get the attention they deserve (considering they do most of the work). Can’t wait to see how this series ends.

Do I even have to write if I think you should read this book? I think you know the answer 🙂

Add it to your TBR List…NOW!!!! 😉
GOODREADS
Thanks for stopping by
and Don’t forget to enter the GIVEAWAY
for a chance to win a $10 Gift Card to B&N or Amazon

Release Day & Giveaway ~ Faking it b

One response to “Review ~ Hero’s Guide to Storming the Castle”