I am honored to be doing this tour
and found this book to be fantastic!! 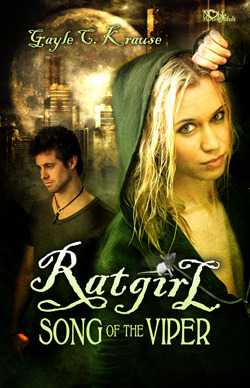 RATGIRL: Song of the Viper
by Gayle C. Krause

Sixteen-year-old streetwise orphan, Jax Stone is an expert at surviving in a dangerous city, where rats rival the homeless for food and shelter, but she’s an amateur at fighting the immoral mayor when he kidnaps her little brother.

Desperation demands she quickly master the role of courageous opponent. She uses her hypnotic singing voice to lead rats to their death, and all the children to safety, in a dying city cursed by the deadly sun.

Purchase
Amazon | Barnes & Noble
~~~~~~~~~~~~~~~~~~~~~~~~~~~~~~~~~~~~~~~~~~~~~~~~~~~~~~~~~~~~~~~~~~
I am drawn to retellings, I love the original stories but something about taking them and making them into something new is intriguing to me. Most people know the story of the Pied Piper of Hamelin; He came to help the town get rid of the rats in return for a price. So with his magic flute he led all the rat to the river and they drowned but when the job was done the mayor refused to pay and the Pied Piper then lead all the children away to a fate undetermined or he killed them like the rats it is told in a few different ways (either way he was a jerk).
Ratgirl by Gayle C. Krause is a retelling of the Pied Piper of Hamelin and it is completely fantastic. It is set in a dystopian world were the sun had become unbearable. It is only safe to be out during the night since the sun can kill you. Most of Metro City has fled to Antarctica, which is now as green and beautiful as our world is now. Jax Stone is a 16 year old girl trying to get enough money to be able to escape the city and make a better life for her and her brother Andy. When the kids all get kidnapped (even her brother) by the Evil Tyrant Mayor Culpepper it’s up to Jax and her friends to get them back. With her beautiful haunting voice she must rid the town of rats and save the children.
I found the characters in the story to be an interesting group each with their own story and I really like how they all worked together and as a whole unit (I really didn’t connect with them individually).  At times I wanted to smack Jax for not listening when others were trying to help her and I found her to be very stubborn however I did think she was a very strong heroine and she really cared so much for her brother and her friends.
The story is what really gets me I was FASCINATED by it. It was an amazing retelling and I thought it was done brilliantly. Just when you thought things were going to work out for Jax and her friends something happens and you get so nervous (I almost had a breakdown I was freaking out so much) it was a roller coaster of events and I felt for the characters and cheered them on. I had a hard time putting this book down and I think it’s a read that really pulls you in to the world that’s created.
I gave Ratgirl by Gayle C. Krause 4/5 stars as much as I loved the story I really didn’t have a very close connection with the characters but I liked them as a whole. I seriously recommend this book, its original and captivating story. I am so glad I got the chance to read it and really look forward to read more from Mrs. Krause and hoping maybe she will write a book #2? 😉
~~~~~~~~~~~~~~~~~~~~~~~~~~~~~~~~~~~~~~~~~~~~~~~~~~~~~~~~~~~~~~~~~~~

AUTHOR BIO
Gayle C. Krause is a member of SCBWI, YALITCHAT and The Cliffhouse YA Wonderwriters.She writes across the genres. Her first publication credit was a short story in Chicken Soup for the Kid’s Soul 2 (2006). The Storyteller’s Daughter, her YA historical short story, was featured in Timeless, A YA Historical Romance anthology from Pugalicious Press (2012).Her new YA novel, RATGIRL: Song of the Viper was published in February 2013 (Noble Young Adult).

During the course of her writing career Ms. Krause has served as assistant editor for Underneath the Juniper Tree, a dark fantasy online magazine developed for young teens, a children’s book reviewer for Children’s Literature .com and she offers a critique service for children’s writers at First Peek Critique.

Meet the Characters in the Good Gods Ser