Ed Moldenhauer, author of the new and exciting children’s educational book series Spin the Globe: The Incredible Adventures of Frederick von Wigglebottom, is a retired United States Navy pharmacist and military intelligence analyst. While having been published in several professional journals and co-writing The History of Pharmacy in the United States Navy, his true passion is honing up on “Ed’s Useless Trivia” to baffle friends and foe alike and to teach his children, Nicole and Eric about every topic imaginable, sometimes to their dismay. Ed proudly teaches at a local community college and resides in Burleson, Texas with his wife, Jo Ann, children and two dogs, Freckles and Cocoa. When he’s not watching history shows or reading, he enjoys the outdoors, adventure races and the fresh air.

Visit his website at: ejmoldy.wix.com/vonwigglebottom to learn more about the series. 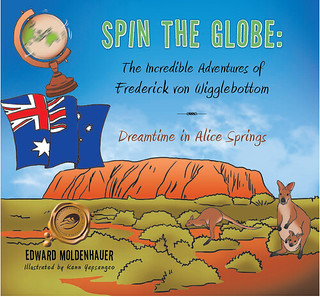 After running out of fresh ideas for bedtime stories, author (and dad) Edward Moldenhauer asked his children to spin a globe and stop it with their fingers. Wherever they landed, he told them a story about that place. His new series of books, “Spin the Globe: The Incredible Adventures of Frederick von Wigglebottom,” is the result of these nighttime tales.

This series is an entertaining opportunity to broaden children’s horizons; the books feature Frederick, a character who explores a new country in each edition. The first story is set in Australia; the second takes readers to Norway. It is the author’s hope that these stories not only entertain but serve as the catalyst to broaden your children’s horizons, instill a desire to learn even more, recognize the wonderful diversity that exists in the world and to become good citizens of our planet.

Dreamtime in Alice Springs takes place in the heart of Australia, near Alice Springs and Uluru. Frederick encounters George, an Aborigine boy practicing his boomerang skills, and Madeline, a girl of European heritage learning traditional dot painting. George and Madeline educate Frederick about this area of the Outback, Aboriginal culture and the Royal Flying Doctors Service in the Land Down Under. Dreamtime in Alice Springs is a Trafford “Gold” book and received a “Recommended” certification by the US Review of Books.

Fjords, Vikings and Reindeer takes place in the city of Trondheim on the coast of Norway. Frederick meets Nikolina, a girl of Viking heritage studying the piano and Erik, a yoik singing Sámi boy from Hammerfest, Norway whose family raises reindeer. Nikolina and Erik teach Frederick all about this area of Scandinavia in the Land of the Midnight Sun.

Two additional books in the series are scheduled for release by the 2014 holiday season. Alpacas in the Andes takes Frederick to Cusco, Peru where his new friends Ernesto and Umiña help him to experience the wonders of the Andes Mountains and Incan traditions. In Turtles of the Reef, Frederick joins K’ayab and Hayá to help release two stranded sea turtles into the ocean and learn all about the ecodiversity of Belize.

RECOMMENDED – US Review of Books
An exciting exploration for youngsters. His creativity is surpassed only by his impressive knowledge of indigenous cultures, local legends, and historical gems. The book introduces youngsters to new lingo, new animals and other nuggets of information that are woven seamlessly into the storyline; children won’t even realize they’re learning. The new words may necessitate several re-readings of the book; however, the author thoughtfully includes a glossary at the end to help young learners (and their parents) master the new vocabulary.

Around the World in 25 Children’s Books – Condé Nast Traveler
Imagine taking your kids on a world tour without ever leaving the house. That’s the idea behind author Edward Moldenhauer’s Spin the Globe: The Incredible Adventures of Frederick von Wigglebottom.
For fresh kids’ bedtime story ideas, Ed had them spin & point to a random place on the globe; wherever their finger landed, that became the setting for his next tale.
Each book in the series features colorful illustrations, conversational prose, and a glossary of terms in the back, making these books great for children-and parents-of all ages. 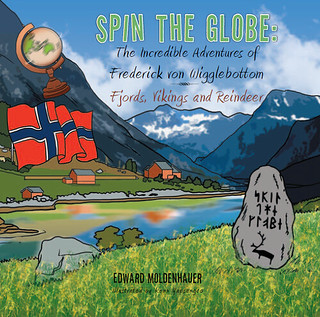 Interview with the Author

What historical figure would you most like to have a discussion with?
I have always thought that talking with Benjamin Franklin would be very appealing. He was a true “Renaissance man”; a scientist, statesman, inventor, and writer, as well as an integral player in the early days of American history. I am sure that the conversation would be fascinating and he would be full of cool quips and quotations.

What makes you really sleepy?
Believe it or not, going to a library to study. In college, when I needed to study I had to go to the student center/union which was full of background “white noise” and I could study all night. If I ever went to the library to study, the calm and quiet would put me to sleep in about five minutes.

What profession have you always admired?
I have admired artists. Being able to take their vision and turn it into something of beauty has always inspired me. While I can pencil draw, I could never get the knack of the flow and blended of the paint from a palette or the molding of clay, everything I have always tried ended up looking like a “paint-by-the-numbers” or a kindergarten bun-a-turt-a- bowl.

What’s a strange occurrence you’ve experienced but have never (or rarely) shared with anyone?
When I was about eleven or twelve, I went outside to feed our dog at night. “Schultzie” would not come out from his doghouse. When I looked into the sky, I thought I saw something weird in the sky. I called my father and we stood there watching what was the weirdest object floating above the tree line, then the object shot off into dark sky. I don’t know what it was that scared our dog, but we were unable to “identify” that flying object. I can still remember every detail of the event, so at least I don’t think we were taken aboard and analyzed!

Do you prefer that people shoot straight with you or temper their words? Why?
Straight shooting is the only way to go. I live by several rules, one of which I learned as a young soldier. When I was given the professional growth opportunity to brief the command staff and I was asked a question my the colonel, I floundered. He reassured me that if I did not know the answer, say so then go find it out. Never lie or ‘shoot from the hip’ because that could get people hurt. I live by that mantra today. It is better to tell the truth and perhaps face a little embarrassment if you don’t know the answer or call the kettle the correct color, than to ‘blow smoke’ and cause even more issues further down the line.

What was the best news you ever received?
The best news I ever received has occurred twice in my life; each time my wife told me that she was pregnant. This level of best news was closely followed by the doctor telling me that each child was healthy –the incredible miracle of life…

What superpower would you want? and what would your superhero name be?
I would really like to have the super power of being able to swim underwater without needing to breathe. I wouldn’t want to have gills, either just being able to hold my breath for a really, really, really long time or absorbing oxygen directly through my skin. I would swim around and thwart the evil powers and motives of world domination by the rulers of Atlantia… I would be known as “Leatherback” due to my thick leathery protective back plate and helmet with built in goggles. My ability to camouflage in with the coral aided only by my trusty sidekicks; Turtle Boy and Dolphin Girl.

What season do you prefer? Why?
It is a close toss up between spring and autumn. Spring is very revitalizing with the flowers awakening from their winter slumber and birds chirping, but it can be a bit wet and muddy. So, I will have to opt with autumn as my favorite. I love the colors of fall, the crispness in the air, the need for a light jacket in the morning and a campfire at night, plus being able to watch college football. You can still have so much activity outdoors like taking strolls and kicking leaves or chopping firewood and enjoying a warm mug of apple cider.

Thank you for stopping by my blog today to check out this amazing author and his book!

Into the Blind by Helen Rena ~ Author&#

Trello and a Spreadsheet~ Task It Tuesda